The kids go back to school with new last names

Calena and William Durel adopted Aubrey and Mariah, who lived with them while they were in foster care. They had twins earlier this year. 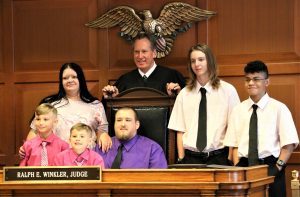 Christopher and Stacy Luckner adopted Elijah, second from the right.

Hamilton County holds its special mass adoption day in November as part of national adoption month. But Probate Judge Ralph Winkler asked to have a second big celebration this year so he could help send kids back to school with their new last names already official.

Winkler presided over 10 adoptions Tuesday, uniting those 10 children with five families. The morning was full of happy tears, especially when one boy, Tevin, surprised his new dad by taking his dad’s first name as his middle name. Tevin and his mom, Heather Haas, had worked it out but kept it a surprise from dad Matt Haas.

Winkler said it’s tough enough to be in foster care and have to switch schools, so he wanted to give some of the kids in care one less thing to worry about for back-to-school time.