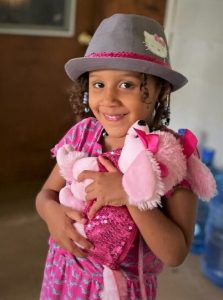 Lilly is 4. She loves animals more than anything.

So her new home, which becomes official Friday, is perfect for her. Her family cares for horses, goats, a dog, a hamster and a stray cat.

Lilly will officially become a Drexler on Friday morning during a special back-to-school adoption day ceremony in Hamilton County Probate Court. Hers is one of three adoptions that morning. Judge Ralph Winkler started the back-to-school ceremonies a few years ago because he wants the children to be able to take their new last names with them to school.

Lilly’s mom, Kim Drexler, had thought about adoption before, back when she and her husband had difficulty conceiving. Her family also cared for foster kids when she was growing up. So she was familiar with the idea.

Since divorced, she wanted her older daughter, Ainsley, 9, to have a sibling. Ainsley was very involved in the process to become a foster family, attending some of the classes with her mom.

“It just felt like our hearts had room for more,” Drexler said.

Lilly had been with another foster family that planned to adopt her but decided against it. She had been with that family since she was a newborn. She first went to Drexler’s as a temporary respite placement in July 2021 and stayed.

The little girl didn’t understand at first why she had a new family. But the Drexlers allowed Lilly time to grieve and helped her through that uncertainty. Now, Lilly calls Drexler “Mom” and has been wholeheartedly welcomed by her extended family and church family.

Drexler has a master’s degree in education and has worked with special needs children. She is extremely patient with Lilly, said Maggi Erhart, their Hamilton County JFS worker. She has worked with Lilly through speech therapy too. They live in Mechanicsburg.

Drexler added a sweet touch to Lilly’s name. She isn’t changing her first name, but added a new middle name – Raylynn, after Drexler’s dad and mom, Ray and Lynn.

“We love Lilly,” she said. “So this is just a small thing to kind of tie her to our family in another way.”