From single foster dad to father of five 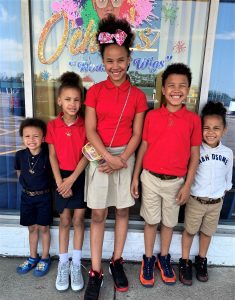 “Those who don’t learn from history are doomed to repeat it.”

This famous quote is true enough. But for those with exceptionally pain-filled pasts, it seems reasonable they would want to run from that pain to avoid repeating it. To learn by moving on and forgetting.

Robert Carter is quite the exception. Far from avoiding reminders of his past, he is embracing his pain with purpose to empower others so they don’t experience it. Five siblings, to be exact. Friday, Carter will be adopting Marionna, Makayla, Robert, Giovanni and Kiontae.

As the third oldest of nine, Carter knows firsthand the tragedy of being removed from a biological home and separated from siblings. At 12, he came into foster care in Hamilton County when his mom, unsupported and struggling with alcoholism, was incapable of caring for her children. He didn’t see some of his younger siblings for years. Carter thrived and was granted custody of a younger sister and guardianship of a younger brother once he was emancipated. His memories motivated him to stand in the gap for his own family and for his new one.

“When permanent custody was awarded to JFS, the five siblings were already placed in three different foster homes,” she said. “Mr. Carter was the only foster parent willing and able to adopt all of the children. His childhood background has made him aware of the importance of keeping siblings together. He says that he enjoys being their father and that parenting them is easier than he could have ever imagined! His life is busy, with a lot of love, laughter and loudness! I have enjoyed working with him and witnessing the children bond as siblings.”

Carter was fostering the three boys when he and the girls’ foster moms came together so the kids could see each other for the first time in six months. The children and the foster parents were all in tears.

“I understand how they feel,” he said. “I understand what they went through, so it really touched me. I was already thinking about adopting all of the kids but when I saw them crying, I was like, ‘Ok, I’m going to take all five to keep them together.’ ”

Carter has been taking care of others his whole life. He missed school growing up so he could watch his younger siblings when his mom wasn’t around. Taking on custody and guardianship, being involved in HEMI mentoring and volunteering at South Avondale Elementary. He feels it is why he’s here.

After Adoption Day, when everything is official, Carter is looking forward to creating a new future with his children.

“Making memories to replace a lot of the bad ones.” he said. “Every night I talk to them and let them know, ‘I’m your dad forever. I know what it’s like and I’m always here for you.’ Like Marionna. She’s warmed up so much since the beginning. At first, she didn’t like me. She walked in my room last night and said, ‘I just want to say thanks for taking us in and taking care of us when our real mom couldn’t.’ It just really touched me.

“So just making memories, letting them know I’m here and they never have to go. I’m here for them no matter what.”