Michael Willis, one of our Wendy’s Wonderful Kids recruiters, retires next week after 20 years with Hamilton County Job and Family Services.

She leaves on a great note – seven adoptions already this year. That’s seven children who had been in foster care who now have permanent homes partly because of her efforts.

Her last two adoptions happened Tuesday – one with a teenager who had been in the system for years, the other with a sibling set of three.

Both teens and sibling sets are among the most difficult situations to find families for. Many people want to adopt, but often they want babies or they are afraid to take three new children at once. 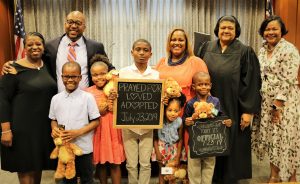 But Terrez and Candice Thomas were OK with three children at once – in addition to the two biological children they already had. They took Juelz, Jayshaun and Ja’Riah into their home in foster care last Christmastime and officially became their forever parents today. The courtroom was full of new official cousins, uncles and aunts.

The finalization, by Magistrate Rogena Stargel, brought Willis to tears.

“This is a beautiful family and a great ending to my story,” she said in court. “They have been phenomenal with these children.”

Her first adoption Tuesday gave a permanent home to a teenage girl – with her aunt, who had tried to step up multiple times before but was deterred by reaction from some family members. This time, the girl asked to live with her aunt and has been doing well in the home for some time before everything became official Tuesday.

The girl and aunt were matched again after Willis, who heard the girl talk about her aunt, decided to call the aunt just to see if she might be interested in taking the girl in. The aunt did not hesitate.

“A child should be with their family if that’s at all possible,” the uncle said in court.

Willis plans to take a vacation, take some time off, then get more involved in events her 7th-grade twins are involved in. After a while, she plans to look for another job where she can work with teenagers.