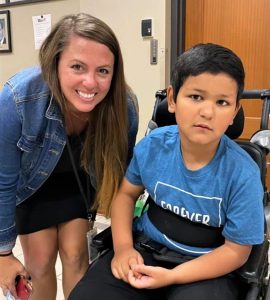 Omarih’s caseworkers looked for years for a forever home for him. Because of his medical needs, he had most recently been placed in a nursing home. They wanted desperately for him to have a real family and home life.

Caseworker Justine Harrison has worked with Omarih for almost five years. In that time, many families expressed interest in adopting Omarih, but she and the guardian ad litem never thought any of them was perfect for him. She remembers sitting in on IEP meetings every year and asking teachers if they knew anyone who might be interested in adopting him or just being a support for him.

Then one day, she got an email from one of his teachers who said the occupational therapist at Omarih’s school had adopted in the past and wanted more information about him.

That email started the journey that ended yesterday with Omarih’s adoption. The little boy who lived in a nursing home not so long ago now lives with a mom, dad and five brothers and sisters. He plays baseball, went to summer camp and visited Florida.

“After meeting with the family, I knew they were perfect,” Harrison said. “Besides having adoption experience and (the mom) being an OT, the entire family welcomed Omarih in with open arms. I was a little nervous at first because of Omarih’s needs and the other children in the home not getting as much attention. But it has been the complete opposite.

“They are all so visibly in love with him. Between playing and wrestling with him to reading him bedtime stores and cuddling with him. You can really tell that they are care about him so much and I don’t think they could see life without him at this point.”

Omarih’s mom, Krista, says it this way: “He’s everything we didn’t know we needed.”

The family adopted before. So they understood the system and the process. They also have three biological children.

With five kids already, the couple felt their plates were already too full to take in Omarih. They tried to help find him a new family by sharing his story over and over on social media.

“After praying for several months for his new parents to be found,” his new mom said, “the prayer changed: “Are we his parents?” Honestly, the answer scared us, but not our kids. As a family, we decided that Omarih needed to come home to us and we would figure it out together.”

To make it possible for Omarih to live in their home, the family installed a ramp in their garage to accommodate Omarih’s wheelchair as well as a chair lift to get him up and down the steps. They added a large walk-in bathroom with a special chair so he can shower. They also bought a new vehicle that holds his wheelchair.

“Just the way that the family lights up when they see him, or when they brag on something new that he did that week,” Harrison said. “It is truly amazing the progress that he has made moving from a nursing home to their home.  They really are perfect for him – and I think they would say that he is perfect for them as well.”

Since bringing him home, the family has learned so much about love, determination and the shield of safety that being in a family can provide.” his mom said. “Adopting him was very unexpected, however, loving Omarih and being loved by him has been one of the greatest, most fulfilling experiences of our lives.”