Now a family of three, virtually 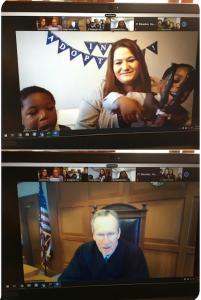 Emily Erdman didn’t want all the uncertainty around COVID-19 to push off her boys’ adoption date. She was ready to become their forever mom and didn’t want a delay.

So she and the boys finalized their adoption virtually, via Zoom, with Probate Court Judge Ralph Winkler. The court has finalized adoptions via Skype a few times, including when an adoptive family lived in Hawaii and when adoptive families include a military person who is deployed. This was the first for Judge Winkler and the first because of the coronavirus.

“I just didn’t know how long it might be before the court would open again,” said Erdman, who’s now home on adoption leave from her job as an occupational therapy assistant. “So they offered this option. It’s a good opportunity for me to be home with my kids and keep us all safe.”

Qezz and Ja’Heem officially became Erdmans last Tuesday. Qezz will be 6 in May. He’s in kindergarten and loved his first try at playing on a basketball team this winter. Ja’Heem’s birthday is soon also – he’ll be 4 later this month. 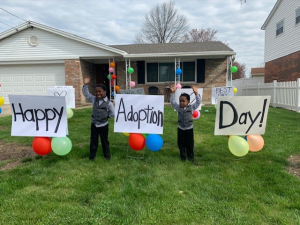 The boys first came to live with Erdman as a temporary foster placement. A single mom, she only planned for one child at a time. They left to go with another foster family, but that family had some difficulties that prompted them to ask that the boys be placed elsewhere. As soon as Erdman heard that, she immediately said she would take them back. She had missed the boys so much. They returned in July 2017 after being gone just a few weeks.

“She was heartbroken when they left her initially and asked that they come back after realizing that they all needed each other,” said Danielle McIntosh, the JFS worker. “Ms. Erdman never wavered on her love for the boys and always did what was best for the children. She is a nurturer by nature and although she has never parented prior to the boys, she is definitely a pro at it.”