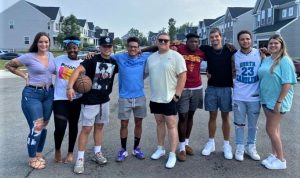 Each year, Hamilton County Job and Family Services partners with Hamilton County Probate Court to hold a special day of ceremonies in August so the children involved return to school with their new last names. This year’s ceremonies will be Friday, Aug. 13, starting at 9:15 a.m.

Ten children will join eight families in ceremonies presided over by Judge Ralph Winkler. Among the cases:

· Tonie, who is being adopted by her long-time foster mom, Bobbie Kelsey, even though Tonie is already 18. This mom says she loves helping teenage girls find their voices and purposes;

· Myla, who is being adopted by her biological brother’s adoptive family. The mother assumed Myla had been adopted long ago, but then saw her picture on hckids.org, where photos are posted of kids who are looking for families. Myla makes Robin Flinchum’s fifth adoption – her “mic drop,” she says, “all boys and a surprise girl blessing.”

About 400 children in Hamilton County custody are currently waiting for adoptive families. That number has risen in recent years, in part because of the opioid epidemic.

Hamilton County experienced a record year in numbers of adoptions in 2019 – 259 children. That was a 25 percent increase over 2018. Because of complications brought on by Covid-19, the number last year was down a bit, to 201.