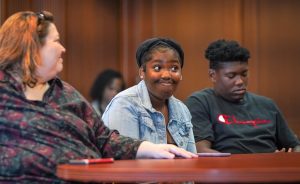 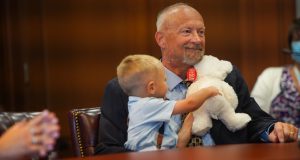 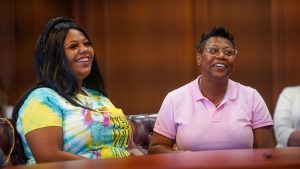 One is just starting preschool, another is in college. But they all were adopted Friday in ceremonies presided over by Judge Ralph Winkler. It was his idea several years ago to host a special back-to-school edition of Adoption Day in addition to the Adoption Day held in November to mark National Adoption Month.

Friday’s ceremonies started with Isaiah Robert, being adopted by Suzanne and Ashley Kahle. The day brought the two women full circle – they happened to come to get their marriage license years before on a previous Adoption Day. At that time, Suzanne asked if maybe stumbling upon the adoptions was a sign for them.

Isaiah was a hit with the news media. He wanted to hold their microphones. When they asked, ‘What day is it?’ he proudly responded, “It’s Adoption Day!”

One adoption reunited Myla Flinchum with her brother. Her brother had been adopted previously by Robin Flinchum, who thought Myla had already been adopted by someone else. That was not the case. When Flinchum saw Myla’s photo on hckids.org, our site for available children looking for families, she offered to take Myla in. She wanted the siblings to be together.

Each story was just as much a tearjerker as the one before.