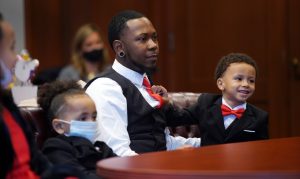 Our annual Adoption Day ceremonies always are so special, so filled with joy.

But this year? The attention to Robert Carter and his adoption of five kids last Friday has been non-stop. Think of a national news outlet and we have probably heard from a representative. People magazine. NBC News. CBS Interactive. Canadian television. And many more. And The Kelly Clarkson Show. And Access Hollywood.

“While searching for stories for upcoming shows, I learned of a wonderful single foster dad from Hamilton County who recently adopted five siblings,” wrote Dan Sterchele, a producer for Clarkson.

“Hi: My name is Rachel and I cover parenting for TODAY.com,” wrote Rachel Paula Abrahamson. “I am reaching out in hopes that you can connect me with Robert Carter. We’d love to do a story on his beautiful family.” She turned her story around quickly, while others are still working on theirs.

We are responding as quickly as possible and Mr. Carter is doing a lot of interviews.

More than 4,000 people watched the video on our Facebook page. The attention is helping push up the donations to the GoFundMe account established by Mr. Carter’s brother. The total went from just over $3,000 first thing Monday morning to more than $40,000 by Tuesday afternoon.

We want to thank Mr. Carter for opening his heart to foster care and adoption. And everyone out there who has sent him well wishes or a donation or shared his story. We hope a few folks who see it will decide to follow in his footsteps.